When we see the romantic films that show Paris as a magical city, we feel the desire for visit this city, special if we are in love,  dream travel for the couples;  if that is your plan, here we give you 10 reasons why to visit the French capital:

Paris, France’s capital, is a major European city and a global center for art, fashion, gastronomy, and culture. Its 19th-century cityscape is crisscrossed by wide boulevards and the River Seine. Beyond such landmarks as the Eiffel Tower and the 12th-century, Gothic Notre-Dame cathedral, the city is known for its cafe culture and designer boutiques along the Rue du Faubourg Saint-Honoré.

The Eiffel Tower is a wrought iron lattice tower on the Champ de Mars in Paris, France. It is named after the engineer Gustave Eiffel, whose company designed and built the tower. Constructed from 1887–89 as the entrance to the 1889 World’s Fair, it was initially criticized by some of France’s leading artists and intellectuals for its design, but it has become a global cultural icon of France and one of the most recognizable structures in the world. The Eiffel Tower is the most-visited paid monument in the world; 6.91 million people ascended it in 2015. The tower has three levels for visitors, with restaurants on the first and second levels. The top level’s upper platform is 276 m (906 ft) above the ground – the highest observation deck accessible to the public in the European Union. Tickets can be purchased to ascend by stairs or lift (elevator) to the first and second levels. The climb from ground level to the first level is over 300 steps, as is the climb from the first level to the second. Although there is a staircase to the top level, it is usually accessible only by lift.

The Louvre is the world’s largest museum and a historic monument in Paris, France. A central landmark of the city, it is located on the Right Bank of the Seine in the city’s 1st arrondissement (district or ward). Approximately 38,000 objects from prehistory to the 21st century are exhibited over an area of 72,735 square metres (782,910 square feet).The Louvre is the world’s second most visited museum, receiving 7.4 million visitors in 2016. The museum is housed in the Louvre Palace, originally built as a fortress in the late 12th century under Philip II. Remnants of the fortress are visible in the basement of the museum. Due to the urban expansion of the city, the fortress eventually lost its defensive function and, in 1546, was converted by Francis I into the main residence of the French Kings. 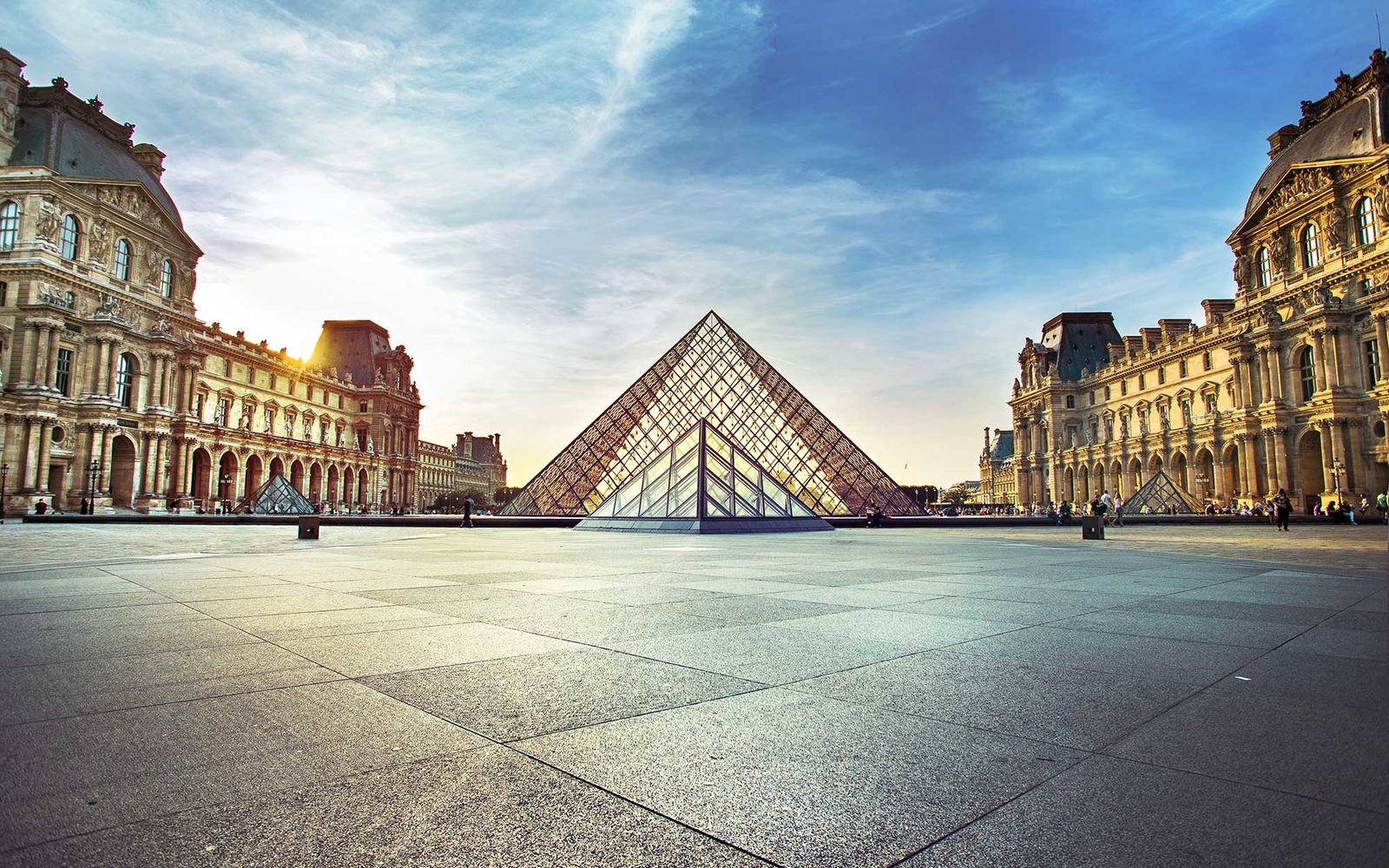 Notre-Dame de Paris meaning “Our Lady of Paris”, also known as Notre-Dame Cathedral or simply Notre-Dame, is a medieval Catholic cathedral on the Île de la Cité in the fourth arrondissement of Paris, France. The cathedral is widely considered to be one of the finest examples of French Gothic architecture, and it is among the largest and most well-known church buildings in the world. The naturalism of its sculptures and stained glass are in contrast with earlier Romanesque architecture. As the cathedral of the Archdiocese of Paris, Notre-Dame contains the cathedra of the Archbishop of Paris, currently Cardinal André Vingt-Trois. The cathedral treasury contains a reliquary, which houses some of Catholicism’s most important relics, including the purported Crown of Thorns, a fragment of the True Cross, and one of the Holy Nails. 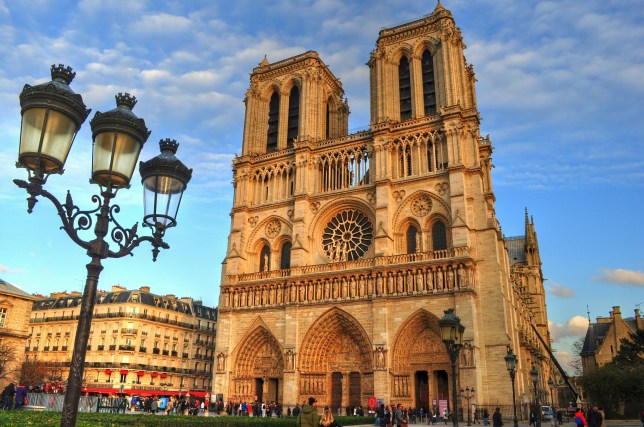 The Arc de Triomphe, is one of the most famous monuments in Paris, standing at the western end of the Champs-Élysées at the center of Place Charles de Gaulle, formerly named Place de l’Étoile — the étoile or “star” of the juncture formed by its twelve radiating avenues. The Arc de Triomphe should not be confused with a smaller arch, the Arc de Triomphe du Carrousel, which stands west of the Louvre. The Arc de Triomphe honours those who fought and died for France in the French Revolutionary and Napoleonic Wars, with the names of all French victories and generals inscribed on its inner and outer surfaces. Beneath its vault lies the Tomb of the Unknown Soldier from World War I.

Le Marais is a historic district in Paris, France. Long the aristocratic district of Paris, it hosts many outstanding buildings of historic and architectural importance. It spreads across parts of the 3rd and 4th arrondissements in Paris (on the Rive Droite, or Right Bank, of the Seine). The Marais is now one of Paris’ main localities for art galleries. Following its rehabilitation, the Marais has become a fashionable district, home to many trendy restaurants, fashion houses, and hip galleries.

The Marais is also known for the Chinese community it hosts. Other features of the neighborhood include the Musée Picasso, the house of Nicolas Flamel, the Musée Cognacq-Jay, the Musée Carnavalet, and the new and very popular Café Charlot. 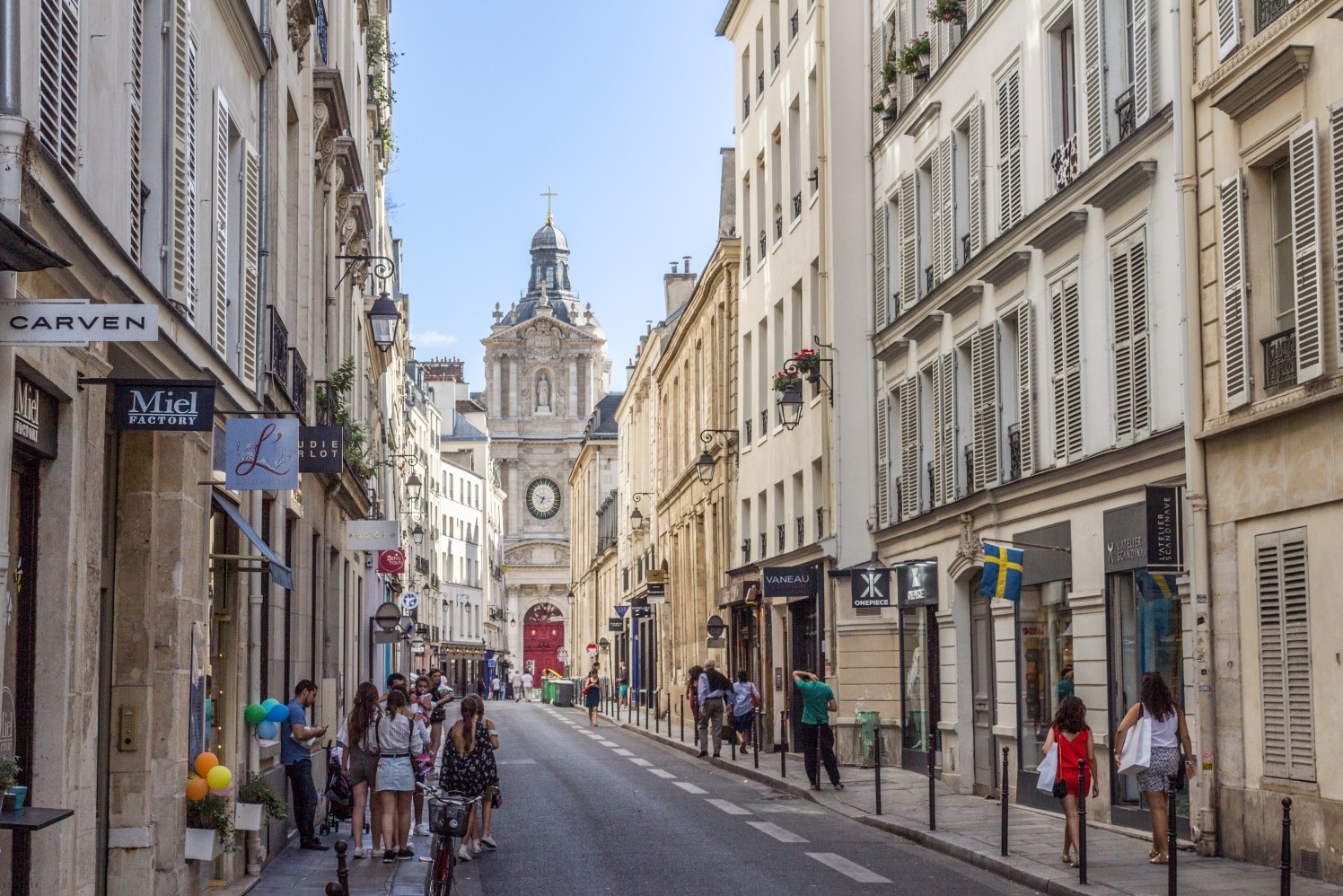 “Le Jardin du Luxembourg”, or the Luxembourg Garden, located in the 6th arrondissement of Paris, was created beginning in 1612 by Marie de’ Medici, the widow of King Henry IV of France, for a new residence she constructed, the Luxembourg Palace. The garden today is owned by the French Senate, which meets in the Palace. It covers 23 hectares and is known for its lawns, tree-lined promenades, flowerbeds, model sailboats on its circular basin, and picturesque Medici Fountain, built-in 1620.

The garden in the late nineteenth century contained a marionette theater, a music kiosk, greenhouses, an apiary or bee-house; an orangerie also used for displaying sculpture and modern art (used until the 1930s); a rose garden, the fruit orchard, and about seventy works of sculpture.

The Seine is a 777-kilometer-long (483 mi) river and an important commercial waterway within the Paris Basin in the north of France. It rises at Source-Seine, 30 kilometers (19 mi) northwest of Dijon in northeastern France in the Langres plateau, flowing through Paris and into the English Channel at Le Havre (and Honfleur on the left bank). It is navigable by ocean-going vessels as far as Rouen, 120 kilometers (75 mi) from the sea. Over 60 percent of its length, as far as Burgundy, is negotiable by commercial riverboats, and nearly its whole length is available for recreational boating; excursion boats offer sightseeing tours of the Rive Droite and Rive Gauche within the city of Paris. There are 37 bridges within Paris and dozens more spanning the river outside the city. Examples in Paris include the Pont Alexandre III and Pont Neuf, the latter of which dates back to 1607. Outside the city, examples include the Pont de Normandie, one of the longest cable-stayed bridges in the world, which links Le Havre to Honfleur. 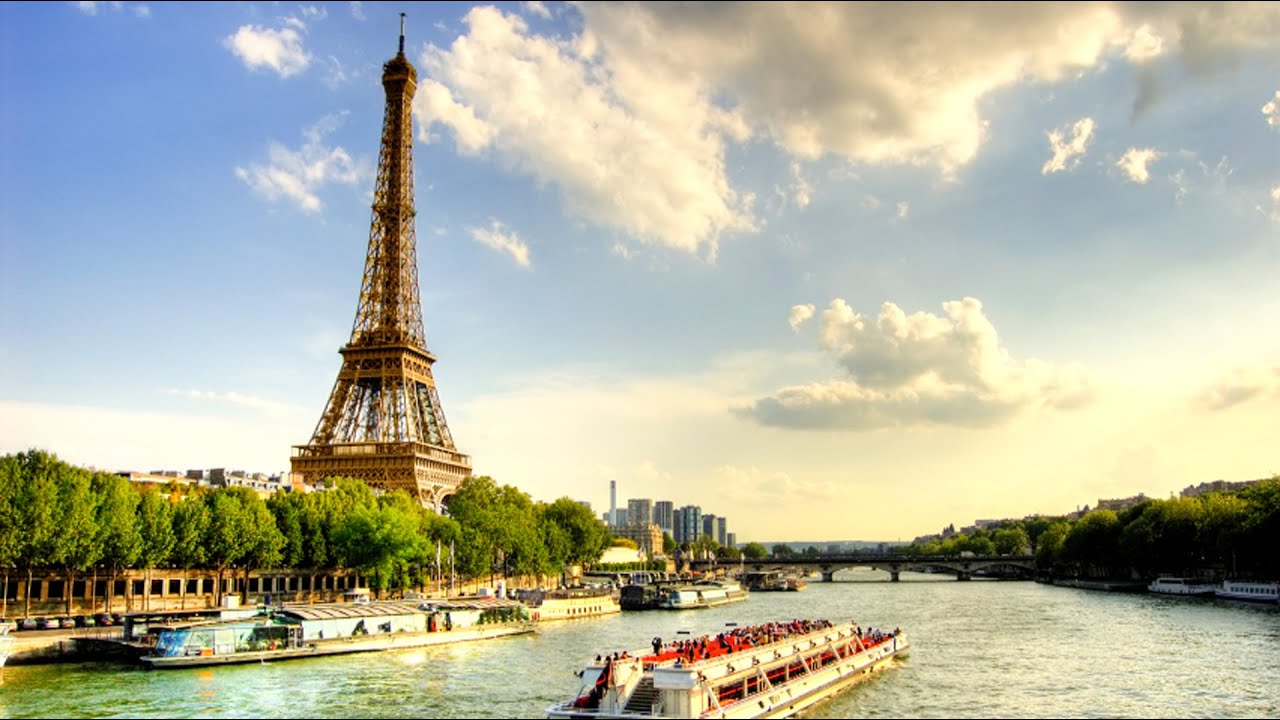 9.-Delicious food with a unique style

For the French, food is not purely a necessity of life, it is a joy to be savored three times a day. Its cooking and its eating are integral to French everyday life. While internationally-famous chefs and their michelin-starred restaurants are a valued Parisian institution, you can still eat excellent cuisine, either classic or adventurous, without remortgaging your house. It really is possible to start the day with a warm, light, melt-in-the-mouth croissant accompanied by sweet, fruity jam and then washed down with real French coffee on the sun-kissed terrace of a cafe. From the lofty heights of haute cuisine in the Eiffel Tower to the humble croque monsieur in a traditional Parisian bistro to the cool international character of the 13th arrondissement, Paris is a city bursting with flavor.

10.-The finest art that man can produce

There are many reasons to visit Paris but one of them has to be art. Thanks to its conscientious Kings and Presidents of old, Paris boasts a very impressive display of art, classical and modern. When the enormous majesty of the Louvre is overwhelming, there is the Musée d’Orsay just across the river to offer an antidote with its wonderful collection of Impressionists. The Centre Pompidou is a work of art, inside and out, and is only second in the world to New York’s MoMA in the importance of its collection of modern art. Shocking and innovative in its conception, it is now a haven for art-lovers. If that isn’t enough the Musée du Quai Branly (African and Asian art), Musée de l’Orangerie (lots of Monet) and the Musée Rodin (does what it says on the tin) should keep your arty side satisfied. 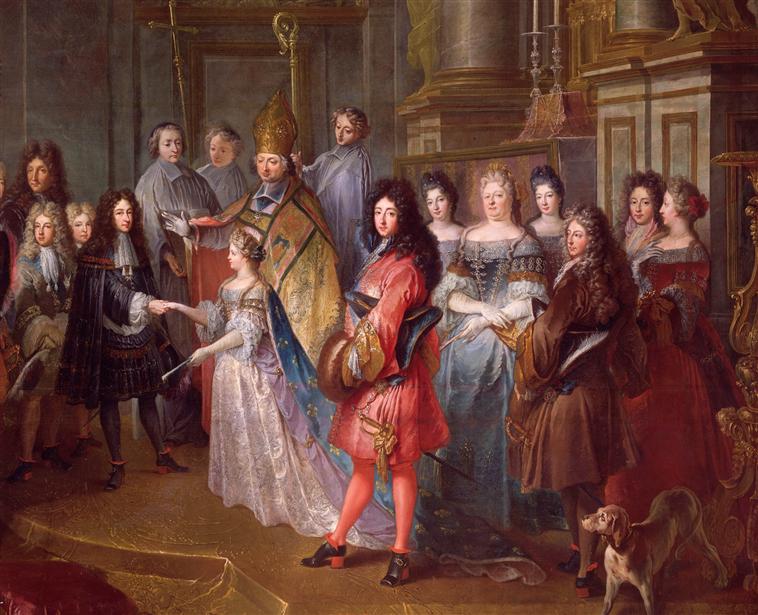 And finally if you want fall in love with Paris…French is called the language of love and Paris has long been hailed as the most romantic city on earth so even the most hardened hearts amongst us would struggle not to be charmed by this place. And its not just romance of the physical kind, but of the architecture, the history, the boulevards and the parks. It’s the romance of sitting in a cafe reading all afternoon, it’s the romance of neighborhoods packed with impoverished writers or a shadowy jazz club open all night. Whether you visit Paris with a loved one or not, it is hard to ignore the romance of the stunning Paris… Oh  lamour!!! 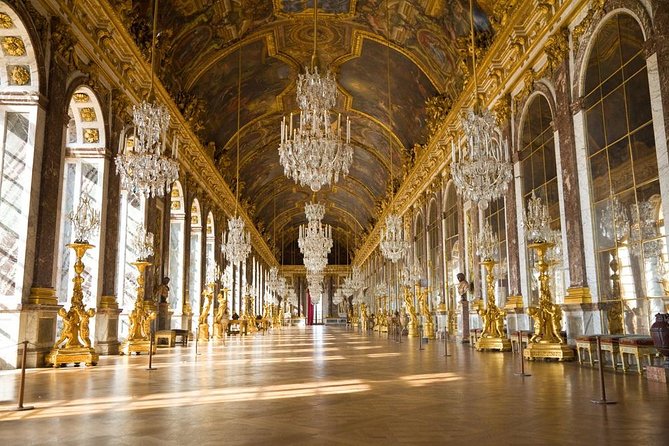 IK LAB TO OPEN AT AZULIK IN TULUM MEXICO