You’ve seen it worn by celebrities, its a cult item beloved by the fashion industry, its a classic thats instantly noticed – the Cartier LOVE bracelet. So, how far would you go for love? Thats the question Cartier poses for its now-iconic piece.

Taking it all the way back to 1969 in New York City, the LOVE bracelet came all thanks to a young Italian jewelry designer named Aldo Cipullo. It may be surprising some, but the look was inspired by the chasity belt and the everlasting symbols of love. Instead of simply slipping the piece onto one’s wrist the bracelet closes as two C-shaped halves before being screwed on with a miniature screwdriver included with each bracelet. They symbolism behind it all is that love is something to not be taken lightly. 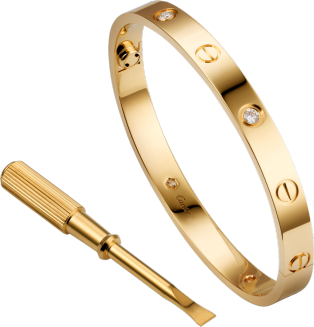 The story has it that the LOVE bracelets could first only be purchased by couples who would surrender their screwdrivers to one another. When Cartier introduced the bracelet, they cemented its high-profile romantic symbolism by giving them to high-profile celebrity pairs like Elizabeth Taylor, Richard Burton, Ali MacGraw and Steve McQueen. Legend even has it that some hospitals of New York City keep a LOVE bracelet screwdriver on hand in case patients need the piece removed, says Vogue.

“Love,” said Cipullo, “has become too commercial, yet life without love is nothing — a fat zero. What modern people want are love symbols that look semi-permanent — or, at least, require a trick to remove. After all, love symbols should suggest an everlasting quality.”

TOMORROWLAND PRESENTS HIS OWN AIRPLANE, AMARE!